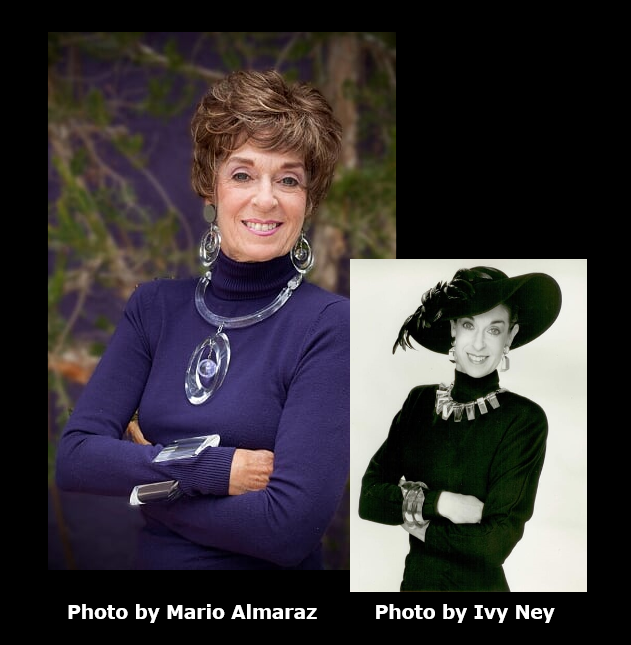 Judith Hendler began her career as a graphic designer. It was while she was the Art Director at Neutrogena Corporation that she met Herb Ritts, who was to become her husband and introduce her to the magnificent material that was the basis for her dynamic acrylic jewelry. The acrylic that Judith Hendler began her jewelry line with was aircraft scrap that was originally sent to her husband, Herb, by his long standing friend, Dave Swedlow. Dave was the owner and developer of Swedlow Aircraft. Swedlow made continuous form acrylic which was made into nose cones and windows for airplanes. While the material was exquisite, a small flaw rendered the finished product unusable, creating a huge mountain of scrap. It was this scrap that Dave sent to Herb (recycling was not yet a coined word or in fashion!) to use and it was the scrap, from the scrap of Herb’s furniture, that Judith originally used to create her jewelry!

Judith’s original idea was to make one-of-a-kind creations to sell at art shows or galleries. While shopping for material at a fabric store on Beverly Blvd., in which to place the jewelry, she was spotted by Nolan Miller, the clothing designer for the blockbuster TV series, “Dynasty.”  Mr. Miller invited Judith to bring her designs to his studio so that he and Joan Collins could select pieces for the show, for which he would then design clothing. On entering the room where the jewelry was spread on the floor, Joan exclaimed, “Oh, Nolan, can we have some of these for Alexis!” (Alexis was Joan’s character in Dynasty.) And so, the use of Judith Hendler’s jewelry on television and in the movies began. Such shows as Dynasty, Knot’s Landing, Hotel, Days of Our Lives, along with many others were all to sport her creations. Over the years various other designers used her pieces on the runway to enhance and unite their clothing. Among those were Alfred Fiandaca, Gregory Poe and James Reva as well as the aforementioned Nolan Miller.

Over the years Judith Hendler’s jewelry has appeared in most of the larger, upscale department stores, such as Bonwit Teller, Saks 5th Ave., I. Magnin, Bullocks, Bloomingdales, Nordstrom as well as many smaller boutiques.

Judith Hendler’s designs have appeared in numerous fashion magazines, such as Harper’s Bazaar, Vogue, Elle, Women’s Wear Daily, as well as in both Canada and Japan. Designs have also been used as cornerstones of ad campaigns such as her Champagne bracelet that was used by Elizabeth Arden in a cosmetic ad campaign.